Member Promotion HAYS | Not All Immigration Is Bad 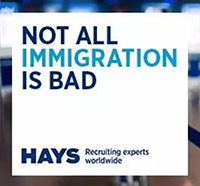 I consider myself extremely fortunate to have spent a large part of my professional career working in different countries across Europe, North America and Asia. I couldn’t recommend the experience highly enough. Time spent living away from my home country was life changing for me, both professionally and personally. Over those years, I felt welcomed into local societies, encountered a vast range of cultures and people, gained valuable experience that I would not have otherwise gained, and as a result, my own career and life has certainly been richer and more fulfilled.

Sadly, it seems that such opportunities may soon become far more limited. Our increasingly open world is now changing and over the past few years, we’ve all seen how changing political landscapes have focused increasingly on immigration. The topic of immigration as a whole has come up time and time again in recent elections around the globe, including the United States, as well as in France and the UK, and it is usually portrayed as a bad thing. While the overall debate around immigration is extremely complicated, it is simply wrong to broad-brush that all immigration is bad and must be curtailed. After all, the USA was built on immigration in the first place and the UK economy partly owes its strength to its historic reputation for attracting skilled workers from around the world to staff its industries and public services.

BORDERS NEED TO BE OPEN TO SKILLED WORKERS, NOT CLOSED

And this is why I feel it is important that politicians, and the government policies they enact, start to draw a clearer distinction between mass unskilled immigration and the movement of skilled workers across borders. The two are very different, yet few politicians seem to grasp that. We need free movement of skills in order for economies to run at their full potential and in turn for society to enjoy the many benefits it brings. Put simply, countries need to be opening their borders to skilled workers, not closing them.

The prospect of a limit on skilled migration is now very real in more and more countries. Understandably this is creating growing concern to those who rely on access to talent pools beyond their own borders. As a recruitment company, my business sees all too well that without access to the best talent both locally and globally, businesses often find themselves exposed to a skills gap, making it harder for them to achieve their goals. This is the worrying reality for many today.

There’s been a huge amount of research into this topic which cannot be ignored as it consistently points to the clear correlation between appropriate immigration and economic growth. Here are a few examples:

•In the UK, the CBI has recently announced that European workers are crucial to the success of UK businesses and the wider economy, calling for an immigration system “based on need” rather than curtailing numbers to hit some arbitrary or specific target.

•This same report also acknowledged that without maintained access to global labour markets, businesses may be forced to postpone investment decisions because they are unable to access the necessary skilled workers.

•A recent study in the US, by the National Academy of Sciences (NAS), also relayed the importance of skilled migration by stating it is likely to increase productivity and economic growth.

There may be a political need to cut migration in order to get (re)elected, but we simply can’t ignore the fact that businesses still have a real and pressing need for it. And that leads me to my next point – the free movement of talent makes really good business sense.

The benefits of working abroad aren’t just limited to individual careers – the benefits to businesses are real too, and there are lots of them. The free movement of talent simply makes good business sense, and it’s hard to argue otherwise in my opinion. In economic terms, it’s a simple supply and demand equation and talent should be allowed to move to where the demand is felt. Secondly, we know that diverse teams often perform more strongly than those made up of people with a similar background or set of experiences. Finally, hiring in external talent often raises the skill level of current employees. This can only ever be a good thing.

WE MUST UPSKILL OUR LOCAL WORKFORCES TO ENSURE LONG-TERM PROSPERITY

I have absolutely no problem with policies that enable a local economy to become self-sufficient in the skills its industries and public services require. In fact, such a system will provide a long-term competitive advantage for that economy. So, with a context where immigration is most likely to fall in the coming years, at least we have started to see increased focus on filling the skills gap by better educating and training local workforces.

Many years ago my first job was as an apprentice engineer, so I speak as someone who has personally benefited from skills-led training. Sadly such systems were largely eliminated in the intervening years in the UK, but have now started to make a comeback as realisation dawns again that they provide an excellent route into the world of work for many young people. This is why the UK government’s recent decision to launch T-Levels (the planned overhaul of technical education) is so important: it signals a real commitment to developing talented young people into the skilled workers we will all need to hire tomorrow. A country doesn’t need to invent something from scratch however. There’s nothing wrong in copying someone else’s good idea and we could all do far worse than look at Germany’s longstanding and successful apprenticeship model. There, most apprentices join a three year programme, combining employer training with education learning. Germany still has its own skills gap but it would be far, far worse with out the benefit of its systems that make technical education crucial to its economic success.

But, the upskilling of local workforces alone won’t solve the immediate skills-gap problem.

The problem with focusing entirely on local initiatives such as T-Levels and wider apprenticeships is that they do not solve the immediate problems that sit in front of business leaders today – the widening skills gap and consequent inability to staff all the roles that industry is creating today. Educating our young people is an excellent long-term approach, but it doesn’t plug the gap that is already apparent to many businesses currently trying to hire skilled workers. Establishing a talent pipeline for the future is something that takes time and can’t simply happen overnight. If education is the long-term solution to the skills gap, then skilled migration seems to be the only shorter-term solution. Sadly, more and more countries are taking the opposite approach. However, some seem more enlightened, allowing skilled immigrants to fill the gaps that targeted local investment cannot yet fill. For example, Justin Trudeau’s government in Canada has recently launched a new ‘Global Talent’ scheme that will make it easier for people to obtain skilled worker visas, acknowledging the value that these people can bring to the nation.

Ultimately, one of the key points that must be made is that prosperity and growth depend on people, and that without the right talent and skills, businesses and therefore societies can flounder rather than flourish. Take the UK again for example. Domestic working age population growth is simply not high enough to drive long-term sustainable economic growth above around 2% without a significant boost in productivity. I see no imminent breakthrough on the productivity conundrum so without further immigration, the UK should start to prepare for an era of anaemic economic growth at best. That will starve further investment, leading to even slower growth and fewer jobs being created than would otherwise be the case. Net net, everyone loses. The UK is not alone with this equation. It is therefore vital that businesses across the world can access the broadest possible group of candidates with diverse sets of experience, as these are the individuals that will help to generate local economic growth.

Unfortunately, I don’t think we in business have done a good enough job to make sure our respective governments hear our concerns about the lack of access to talent that closing borders brings. Having access to the very best people, regardless of their origination, should be an issue near the very top of any government’s agenda. Running a business, I want the very best people working for me so that I can compete and win in a global market. Surely running a country warrants the same approach to attracting talent?

However, we must not lose sight of the fact that it is not just business that stands to benefit from this. Allowing skilled migrants onto our shores (wherever those shores are) will allow companies to run to their full potential. That in turn creates more jobs and more opportunities for local people at all skill levels. It increases tax revenues as firms prosper. That pays for more public services, education and infrastructure, creating an even better commercial environment. We all win. But we seem to have a long way to go before everyone agrees on that.