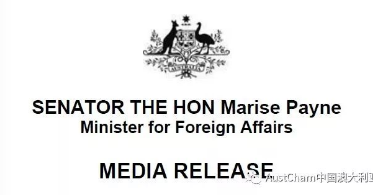 Today I announce the appointment of Mr Graham Fletcher as Australia’s next Ambassador to China.

Australia and China share a multi-faceted and constructive relationship, founded on shared interests and mutual respect. Our Comprehensive Strategic Partnership is characterised by strong economic ties and collaboration on our shared priorities.
China is Australia’s largest trading partner, with two-way trade in 2017-18 totaling $195 billion.

The long-standing links between our countries also continues to grow through tourism, and increasing education and people-to-people links.

Mr Fletcher holds a Bachelor of Arts (Honours) from the University of Sydney.
I thank outgoing Ambassador Jan Adams AO PSM for her contributions to advancing Australia’s interests in China since 2016.

STRENGTHENING THE FUTURE OF THE AUSTRALIA-CHINA RELATIONSHIP

The Morrison Government will establish a new and innovative National Foundation for Australia-China Relations to strengthen one of Australia’s most significant bilateral relationships.

The National Foundation will be a high profile platform for the promotion of Australia-China ties. It will harness efforts of the private sector, peak bodies, NGOs, cultural organisations, state and federal agencies and the Chinese-Australian community to turbo-charge our national effort in engaging China.

However, the remit and resourcing of the Council have remained static even as China has transformed and our bilateral ties have dramatically expanded in breadth and complexity.

The new body will have substantially increased funding, enabling it to engage on a much broader scale than the Council. The new body will move beyond the Council’s current focus on education, culture and the arts, to also promote Australian excellence in areas such as agriculture, infrastructure, health and ageing and the environment and energy.

The Foundation will also provide practical support and expertise to Australian stakeholders developing links and exchanges with counterparts in China.

The Foundation is a fitting successor to the existing Australia-China Council.

I am delighted the current chair of the Australia-China Council, the Hon Warwick Smith AO, has agreed to be the inaugural Chair of the Foundation. The Government will make an announcement about board members in due course.

There are many areas where Australia and China share common objectives and where we can maximise mutual cooperation to the benefit of both countries. We have different perspectives on some important issues and the new foundation will encourage and enable considerable constructive discourse and engagement between our two countries.

This new initiative reflects the Australian Government’s commitment to a constructive relationship with China, founded on shared interests, mutual benefit and mutual respect, including through the Comprehensive Strategic Partnership.

Preparatory work on the establishment of the Foundation has commenced and the Department of Foreign Affairs and Trade will consult state governments, business and community organisations in coming weeks.